Next Tuesday, the Supreme Court will hear arguments on California Proposition 8, the voter initiative that overturned marriage equality in my home state.  18,000 couples married in the brief window before it passed, and I proudly stand as one of them.  The question now is whether California can legally deny the word "marriage" to devoted couples in legal partnerships.  The crux is what the goal of Prop8 was, and since all it did was take away the word, and not other aspects of marriage, its achievement is purely to make gay people "less than". (I commented on this at the time.)

Then, on Wednesday, the court will hear arguments on DOMA, the federal law that prevents legally married same sex couples like me and my wife from the over 1300 federal rights and benefits of marriage.  This one seems pretty clearly a fail on the constitutional issue of equal protection, but we'll see.

Zack Ford tells us what these cases are really about.


While there are various legal nuances to how both the Defense of Marriage Act and Proposition 8 cases might be decided, the Justices will actually be weighing a more fundamental question: Do gay people exist?

At the core of conservatives’ argument against marriage equality in both cases is the idea that gay people actually do not exist — only “homosexual behavior” does. ... In other words, people are only really gay when they’re having gay sex — otherwise they’re not.

Herein lies greatest challenge for gay and lesbian civil rights: the fact that sexual orientation is an invisible identity. Unlike race or gender, it cannot so easily be superficially assessed. Thus, conservatives are counting on doubt and distrust, urging the Court to dismiss whatever gay people actually say about their lived experiences — discount every individual’s coming out story, ignore decades of gay culture and gay history, and disregard the scientific conclusions of the entiremajor medical community. In fact, opponents of equality regularly claim that “the gay agenda” is merely a conspiratorial quest to validate sinful behavior — as opposed to an effort to allow millions of people to participate fairly in society.

The Court will have the opportunity to weigh the question of whether gay men and lesbians exist in both a legal and practical sense. ...

If any of the Justices determine that the answer.... is “no,” they would have to deny many facts in the process. They would have to discount the government’s Lavender Scare witch hunts of the 1950s, decades of police persecution and brutality, the ambivalence to research HIV when hundreds of gay men were dying of AIDS, and laws that have specifically targeted gays and lesbians for discrimination, like “Don’t Ask, Don’t Tell.” They would have to set aside the 38 states that have banned same-sex marriage, many by a majority vote in a constitutional referendum. And they’d have to impose their own understandings of identity upon the millions of people who identify as gay, lesbian, or bisexual and cannot change their sexual orientation.

The end result of these cases will determine the legality of same-sex marriage, but for the first time, the Court could actually acknowledge that gay people exist and thus deserve protection under the U.S. Constitution. On both a symbolic and legal level, the latter victory could be much more significant.


What can you do?  Come out for equality!  In advance of Tuesday's SCOTUS arguments on marriage equality:

1.  Wear red on Tuesday in support of equality!
2.  Participate in peaceful pro-equality demonstrations, in Washington DC and beyond.  These will be going on in all 50 states, some on the weekend, some on the eve, and some on the day. 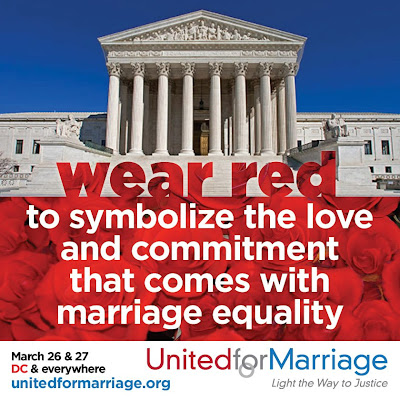 Oooh, since I've been working out, I'll wear my red muscle-T and show off my shoulders. ;-)

[I wish I could to do more to commemorate this (SCOTUS), but our choir director is really a task-master during Holy Week... :-X]

Is the above what I think it is? Spam "complaining about spam"?! O_o