Coming Out as a Leader

By now you have heard all about the "Slee Memo" which exposes the machinations used by the Archbishop of Canterbury to ensure that a celibate gay man would NOT become Bishop of Southwark. If you haven't, trot over to the Lead and read all about it there. It paints a very unflattering picture of the Archbishop, and casts a very poor light on a process wreathed in secrecy. Yelling at people, reducing participants to tears, and arm-twisting in the men's room are hardly examples of effective leadership let alone Christian ethics.

And then, in a fit of legalism, they decide that while they can't eliminate someone simply because he's gay, they can eliminate him because people in the diocese might not approve. So a racist must be placated if a candidate is black? The Church Times reveals there is a "checklist" to be applied to gay candidates that is profoundly offensive. There isn't even a pretense of making this equivalent to sexual history questions asked of straight people, showing yet again that it's not about Biblical standards of sexual morality, but selective and hypocritcal application of such standards to gay people only, while giving straight people a bye. Go over to Grandmere Mimi's blog to learn more.

My take on all this is that the Archbishop long since decided to throw over his principles in an attempt to hold things together. He sees a need to placate the conservatives on gays, and on women. Of course, the conservatives will never be placated (witness our Republicans in Congress who plan to plunge the country into default or decimate the entire government, no middle way about it). And by not being true and honest to his own beliefs, the Archbishop lost the ability to lead. He's not leading. He's reacting. In his efforts to save the CofE and the Anglican Communion, he's basically ensured their demise. The irony is something, isn't it. Rather than helping the C of E "get over it", he's ensured that the Gay Issue remains front and center.


The danger, several years down the line, is that there are bishops who unquestionably have been less than candid about their domestic arrangements and who, in a conspiracy of silence, have been appointed to senior positions. It is in the nature of things that this situation cannot endure, and exposure of the reality wold be 'nuclear'. 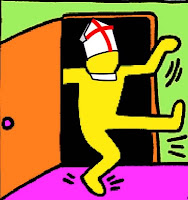 Like Gene Robinson, Jeffrey John was not the first gay candidate for Bishop. He's simply honest. Those gay bishops should be ashamed of themselves. They are no different than Larry Craig, the toe-tapping Idaho Senator who never missed a vote against gay people while hiding the fact that he's himself gay, or George Rekers, the anti-gay zealot who travels with a rentboy to "lift his luggage."

So now, there's an opportunity for leadership from those bishops. Do they continue to protect their tidy little closet, for the sake of power and influence, as the walls start to crumble? Or do they finally step out of the closet, bearing witness to their service, and help their church through this crisis into an honest future?

Are they leaders, or not?

Gay Bishops : it's time to come out.
Email ThisBlogThis!Share to TwitterShare to FacebookShare to Pinterest
Posted by IT
Labels: ABC, Church of England, Rowan Williams

I'm against outing in general but think it is time to expose the ABC's hypocrisy and tell the world which Anglican bishops would not have their positions under his current prejudices.

I'm for outing those who actively work against their own kind.

I think it's time to out some bishops.

I am not for outing either and am wary of the call for it. The clamor for martyrdom is not ours to sound.

Bishops only have athority IF we give it to them. And we should only grant it when they are complient with the Gospel.

I am not calling to out them. I am calling them to be honest and become the leaders they no doubt claim to be.

Bishops only have athority IF we give it to them.

While this is certainly true of TEC in a very tangible way, how true is it in CoE?

I am quite fond of +Barbara Harris' comment to a meeting of Integrity in the early 1990s:

"Each is entitled to their own closet, but they should not be able to use it as a sniper's nest."

Out them. And I want to know whether +Lindsay Urwin ever publicly repented of his same-sex activity before he became a bishop?

The entire situation is appalling. I think the lizard people must have stolen the real Rowan Williams & replaced him with a clone. Everyone knew why he was chosen & what he was supposed to do. He has done exactly the opposite.
I was told years ago about the number of closeted gay bishops in TEC. Had they come forward then, that would have put an end to the controversy. Of course they didn't. I am sure that there were still some at the time of Gene Robinson's election. That would have been a good time to step forward. No one did. The ridiculous situation in the C of E would evaporate if the (numerous) closeted bishops (many knowingly ordained by Rowan himself) would just come out. They won't.

I've said almost nothing about the Slee Memo (wot's w/ the Brits and their bombshell memos? O_o) . . . simply because everything that's needed saying has been said.

But I love the graphic! [IT, yours?] Keith Haring would approve, I think.

The graphic is built on a common cartoon used to illustrate coming out. I added the mitre and dogcollar.

Things started to change after Harvey Milk called us to come out and Audre Lord reminded us that "your silence will not protect you."

I am not a fan of "outing". I am a HUGE fan of anyone who comes out on his/her own.

Gay bishops in the CoE are going to be looking over their shoulders now. There will be a HUGE incentive for reporters to follow them. If they have any smarts at all (I won't even add "integrity," since I think it's clear they don't have any), they will come out on their own...

Are gays in the clergy in higher or lower numbers than their percentage of the general population?

The graphic is built on a common cartoon used to illustrate coming out.

Yes, by the late Keith Haring.

I added the mitre and dogcollar.

That was my question! Well done.

[That's a pretty broad question, Anon. Could you be more specific? Which clergy/of which church? And do you mean all gays, or just out ones? (And of course, "% of gays in the general population" is wildly in dispute!)]

Why don't all clergy unite and say they are gay in principle? That would be a mark of solidarity for Jeffery Johns and those who have been discriminated against.