Who are you? Results of the FoJ poll

The graph to your right counts the unique visitors to Friends each day last week (total page views, not shown here, are larger as some of you come back). Typically more visitors come during the week than on weekends (thus we are all skiving off work to be here. I see you! ;-) We averaged 119 unique visitors per day last week, which is pretty typical.

We got 116 unique responses to our poll, which is a great response rate, so thank you everyone! I have processed the basic data for you. The raw numbers (not percentages) are provided. Click on any graph for a closer view. 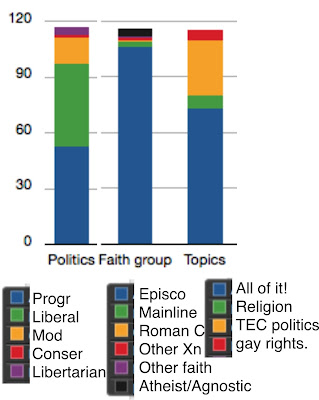 Politically, about 80% of you are progressive or liberal in your politics. As for your religious identity, nearly everyone is Episcopalian (or Anglican of some flavor). We also have 4 atheist/agnostics, a Roman Catholic, a few other Christians of different types, and a couple of "others". Quite of few of these non-'piskies visit daily.

When asked your favorite topics, slightly more than half say "all of it!" A substantial fraction prefers the posts on Episcopal and Anglican politics. A few like the religion/spirituality topics best. I'm going to take that as meaning that we are doing a pretty good job mixing it up.

Next, let's look at the access and participation. Only 4 people considered themselves regular commenters, while more than half of you are lurkers. The rest are occasional participants. (Don't be shy, dive on in!) 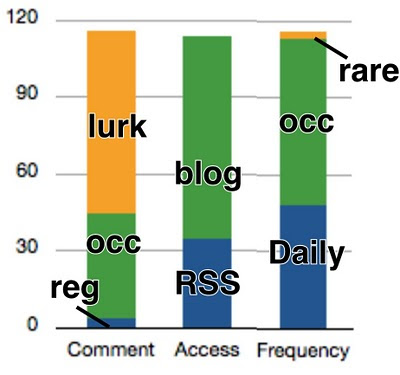 About a third of you get here via RSS feed. Slightly under half of you drop by daily, or even more often, which we take as a great compliment. Nearly everyone else is in the "occasional" category.

I also asked how you categorize yourselves. The possible answers were, "I'm a Friend of Jake!" , which over 70% chose. Then there was, "I'm not really one of you, but I like the blog," which accounted for nearly 20%. About 7% of you chose "I drop in now and again but I'm not really into it". Interestingly at least two people in the latter category nevertheless visit us daily. 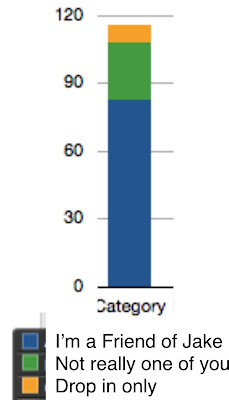 Folks, if you visit here daily, I think you are a Friend of Jake. Just sayin'.

Anyway, that concludes our first Friends of Jake poll. This would be a good time to introduce yourself in the comments if you feel like it. Also feel free to give us any opinions or thoughts you may have (including whether you like the idea of polls!)

Techy note: For those of you with blogger, it's really easy to set up the poll and collect the data in GoogleDocs. I did not analyze it there but imported it into Apple's Numbers program, which is my preferred data analysis program. Happy to explain further if you are interested; drop me a line or FB, or let me know your questions in the comments here.
Email ThisBlogThis!Share to TwitterShare to FacebookShare to Pinterest
Posted by IT
Labels: Friends of Jake, geek, poll

Well one of the four atheists/agnostics here. I assume IT is one of the others (or were the blog owners excluded?).

No exclusions, and yes, I am. RE.my fellows, I don't know if we each filled it out, though.

I am one of the non-Episcopalian/Anglican folks who stop by nearly every day. I comment now and then, but not very often. I keep reading because I enjoy the well written, clearly articulated ideas I find here.

Episcopalian, RSS reader (so I see every post) but mostly a lurker. But you're a regular part of my morning routine such as it is.

I must be one of the 4 regular commenters, but I cannot remember for sure. I know I filled this out, but we celebrated someone's birthday later that day and everything is a bit hazy

I must be one of the Chosen 4, too. I forgot how I answered any of the survey questions. Keep up the good work here!!

I'm one of "The Four". I'll blather whether I've really got anything to say or not! ;-p