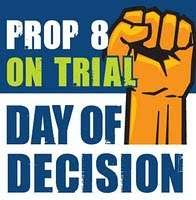 From Prop8trialtracker, the Prop8 decision will be released tomorrow, Weds Aug 4.

I will update here. Also there will be responses in the community; for sites near you look at www.prop8decision.com.

Remember: regardless of the decision, it will be appealed. This is one stage in the journey, but it is a critical one.

Chris Geidner has an excellent FAQ discussing the legal issues here. As I understand it, the Big Questions are as follows:

1. Equal protection argument. Are gays and lesbians a minority that qualifies as a "suspect class"?

2. Due process argument. Is marriage a fundamental right?

Email ThisBlogThis!Share to TwitterShare to FacebookShare to Pinterest
Posted by IT
Labels: Prop8, protests

Thanks for the newsflash, IT.

You're back home, JCF. Get out there with a sign, a banner, and a voice!

Back home---AND in my same ol' sitch.

I am, of course, overjoyed at the news (more on the next thread).