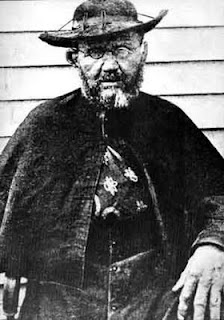 There are some people whom all of us can agree are truly saints on earth. One such must be Fr Damien de Veuster, who ministered to the remote leper colony at Kalaupapa, Hawai'i, eventually succumbing to the disease. This weekend, he was formally canonizedby the Pope.

Although leprosy, or more properly Hansen's Disease, is now completely curable, before that it was a terrifying disease that led to disfigurement and death. In Hawai'i, leprosy was brought in by traders in the 1800s and the King ordered victims to be quarantined. The afflicted, often teenagers, were literally cast off, at times thrown into the waters off the Kalaupapa peninsula on the island of Molokai and forced to swim ashore. This beautiful, but sere place is almost unreachable from the cliffs above (these days you have to take a long mule ride, or a small plane to get there). Those who survived lived meagerly with little care. 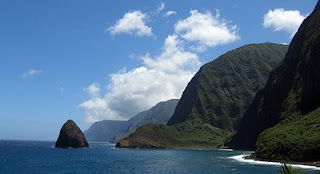 Father Damien de Veuster was a Belgian priest who had come to Hawai'i as a missionary. He asked for the assignment to minister those in Kalalupapa and arrived in 1873. He helped establish a functioning community including a church. Alas, he became infected by the disease and died of leprosy in 1889. He is revered in Hawai'i for his selfless service and there is a statue of him in front of the State Capitol.

Leprosy became treatable in the mid-20th century with antibiotics, although sufferers were still often disfigured, but it is now considered completely curable. However, many of the people in Kalaupapa chose not to leave the place that has been home for so many years. The community of Kalaupapa is dying now, with only a small fraction of older folks left as its only population. It's now a National Historic Park. You can visit it, if you go to the small, lovely island of Molokai and take the mules or a small plane down to the peninsula. Learn more about the people here.

Years ago, when I visited, we were met by an older man driving a school bus, one of the residents, who drove us around the site and introduced its history. It's hard to beileve today in the green loveliness how much agony was there. But the simple Church built by Fr Damien still stands, a testament to love and fearlessness.
Email ThisBlogThis!Share to TwitterShare to FacebookShare to Pinterest
Posted by IT
Labels: Hawai'i, leprosy, St Damien

Actually, it was just announced that he would be canonized (the liturgy will take place in Rome on October 11).

30 years ago, during my time at the Gothenburg School of Commerce, I heard a story about a secretary at the Norwegian Embassy at Caracas who had been put in a Leper colony in an island in Lago Mariacaibo.

You can learn a bit more about Damien de Veuster of Molokai at: www.philomena.org/damien.asp