Ah dear friends, as we know, there's a truism that those who forget the past are doomed to repeat it.  And here we are, indeed, in a surreal experience that feels like the apocalyptic is overlaid on the mundane.

In the early 20th century, the bubonic plague was on the move, and gained a foothold in the American west.  Chinese immigrant communities were hit particularly hard.


[C]ity and state officials in California in the early 1900s tried to deny that the Chinatown deaths were due to the plague. Hoping to limit the economic damage that news of an epidemic would cause, they belittled the scientists and ignored their brand-new understanding that plague was caused by a bacterium carried by fleas riding on rats.

Once the reality of the outbreak was undeniable, the characterization of the plague as a disease born of a specifically Chinese squalor within the Chinatown ghetto delayed the response that the handful of trained public-health experts in place knew was necessary: eradicating the rats that could carry the disease beyond any quarantine line San Francisco’s city fathers might choose to draw. As a result, the disease gained time and space in which to spread—first, across the bay in an almost all-white population, three years after San Francisco’s last case in 1904, and then into rodent populations that spread across the American West, where plague remains endemic to this day.

That’s the epidemiological price we’re still paying for allowing racist tropes to drive disease response more than a century ago.


Ah, a Chinese plague. (By the way a few people get infected by plague in the Western US every year...it's now endemic in rodent fleas in the mountains.) 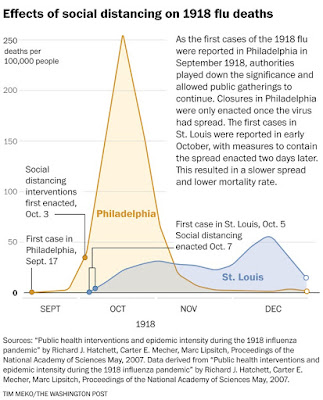 Just a few years later, there was a pandemic of influenza that swept the globe.  Much more virulent than the normal seasonal flu, it infected fully a third of the global population and killed as many 100million. 670,000 of these deaths were in the US (which had a population of about 103 million at the time).  It was called the "Spanish flu" although it did not arise in Spain;  rather, at a time of war, Spain was the only country that talked about it. The Allies and their German foes did not want to reveal the sickness to their enemies.

While science at time knew nothing of viruses, it was clear that this disease was transmitted person to person.  What we are now calling "social distancing" was recommended.  But not all believed this.  The striking comparison was between the cities o St Louis and Philadelphia.  The former closed down public gatherings, concerts, restaurants.  The latter brought everyone together for a large war-bonds parade.  As the graphic from the Washington Post shows, the consequences were lethally different in these two cities.


The 1918 flu returned in three waves between 1918 and 1919, and finally vanished.  Memory eventually vanished with it. The virus remained, however, in the bodies of its victims preserved in permafrost, where it was exumed a few years back, and examined for clues of its origin (probably birds) and lethality.  (By the way, climate change and melting permafrost and glaciers may release a number of old and new diseases. You're welcome.) 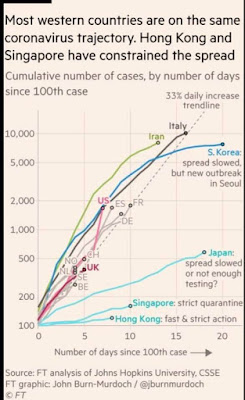 And here we are again:  a virulent disease that spreads person to person, complacent and irresponsible authorities denying science, and attempting to label it as a disease of foreigners in a racist trope.

But we have even bigger troubles. This is an epidemic that is spreading exponentially. With insufficient testing, people are foolish and complacent and assuming it is not so bad.  A science-denying partisanship and irresponsible media (I'm looking at you, Fox news) is feeding into this.  There is no sign that the US is bending the curve like Hong Kong, Singapore, or South Korea.

But the response from our government has been disastrous.


Fox News viewers made the choice that would transform a minor infection into a pandemic back in November 2016. The man they elected appointed an incompetent grifter to head the CDC in 2017. He replaced her with a religious nut in 2018. Trump fired the CDC’s pandemic response team in 2018. He waited two years to even select a White House Science Advisor. Obama’s last Science Advisor was a physicist trained at MIT. Trump’s new one is weatherman from Oklahoma who is already downplaying the importance of federal research funding. Disease is personal. Plague is politics. 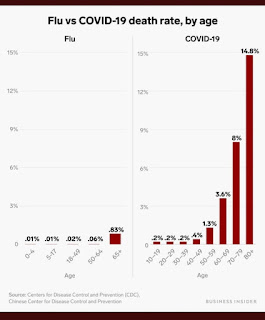 The response of the much-vaunted CDC has been laughably incompetent:  its goal appears to be to keep numbers low by not counting the sick.  But the sick are there.  You can't gaslight a virus.  It doesn't discriminate between Democrat and Republican.

The death rate of this new disease is much higher than the seasonal flu, especially but not exclusively affecting older people.  This has led to some complacency or downright cruelty on the part of the young, thinking it's not their problem if they aren't as sick.  (Though their rates of mortality are also higher than seasonal flu, which kills 10s of thousands of Americans annually.)  So last night, we saw packed bars and parties for St Patrick's day, and the virus spread further.

The only wan light in all this is that many state and local governments and scientists and healthcare workers are doing their utmost.

Now, our only option is to respond by isolating ourselves as much as possible.  The Washington Post had a great animated graphic today explaining how social distancing works. And this Medium article lucidly explains why we have to do it.  The number of people who are infected is probably at least 10x more than the official cases.


When you’re done reading the article, this is what you’ll take away:

The coronavirus is coming to you.
It’s coming at an exponential speed: gradually, and then suddenly.
It’s a matter of days. Maybe a week or two.
When it does, your healthcare system will be overwhelmed.
Your fellow citizens will be treated in the hallways.
Exhausted healthcare workers will break down. Some will die.
They will have to decide which patient gets the oxygen and which one dies.
The only way to prevent this is social distancing today. Not tomorrow. Today.
That means keeping as many people home as possible, starting now.

As a politician, community leader or business leader, you have the power and the responsibility to prevent this.

You might have fears today: What if I overreact? Will people laugh at me? Will they be angry at me? Will I look stupid? Won’t it be better to wait for others to take steps first? Will I hurt the economy too much?

But in 2–4 weeks, when the entire world is in lockdown, when the few precious days of social distancing you will have enabled will have saved lives, people won’t criticize you anymore: They will thank you for making the right decision.

Have you heard of the concept "Flatten the curve"?  Basically it means to preserve health care and lives, we must slow down the spread of the virus, to keep it within the capacity of our healthcare system.

That means, as  much as you can, isolate.  No bars, no clubs, no concerts, no travel.  If you must go around others, do it carefully, with gloves, with masks, avoiding crowds.  Some people have to go to work, the more we can reduce THEIR contacts with US the better for all. 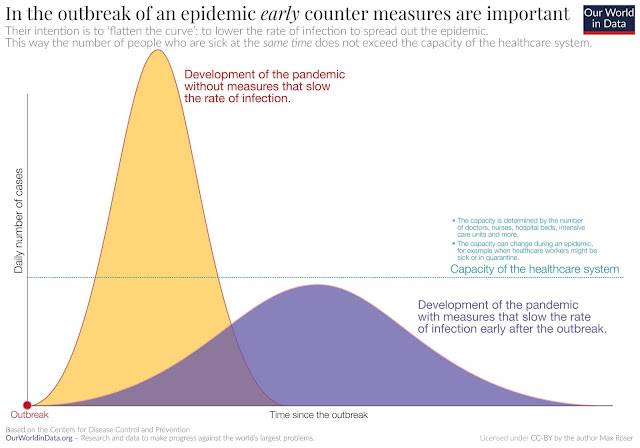 Recent news suggests that asymptomatic people may be infectious, which is particularly terrifying.


As Graham Medley, Professor of Infectious Disease Modelling, told BBC Newsnight people shouldn't act like someone who is avoiding contracting the virus but rather as someone who already has the virus and is trying not to pass it onto others. the way to stop this is to see yourself as infected.

Will this be defeated?  Will it comeback in waves before dying out, like the 1918 flu?  Or will it become endemic, but manageable, like the bubonic plague?  Or is this a new, frightening part of our lives like Ebola?  We can't say.  But what is certain is unless we take severe and active steps NOW, our future looks grim indeed.

Email ThisBlogThis!Share to TwitterShare to FacebookShare to Pinterest
Posted by IT
Labels: covid-19, health, plague, virus