Last night, while much of the nation was watching the vice-presidential debate, I was at All Saints' Chapel of the Church Divinity School of the Pacific with friends and family. It was great to be back in Berkeley. But the best part of the evening was receiving the degree of Doctor of Divinity, honoris causa with the Rev. Robert E. Reynolds. My friend, the Very Rev. James Richardson preached and he also presented me for the degree. He also wrote the following citation:
Michael Garrick Dresbach is a musician and music impresario, blogger extraordinaire, faithful priest, missionary, international liturgist and linguist, husband, father, grandfather, and treasured friend to many at Church Divinity School of the Pacific and Central America, and in cyberspace as well. Michael was born in Oakland; his parents were missionaries. At the age of 14, Michael informed his parents that he was called to be an Episcopal priest. As a young adult, he entered the music business, played in rock bands in the Bay Area, and married Mona Neimoyer - now known worldwide as "the Lovely Mona" thanks to his frequent postings on his popular blog, "Padre Mickey's Dance Party." Michael entered CDSP in 1994, and as a student he participated in The Panamá Project, which provides a summer of study and service in Panamá for U.S. seminarians. Michael received his M.Div from CDSP and an M.A. degree from CDSP and the Graduate Theological Union in 2000. While in Panamá, he was bitten with a call to return as a missionary. In 1999, Michael and Mona made a three-year commitment to live as missionaries in Panamá. They stayed 12 years. Michael began work in the Theological Education Department of the Diocese of Panamá and was Diocesan Missioner. After his first year Michael became Rector of Parroquia San Cristóbal, the largest parish in the diocese, and became co-director of the Panamá Project. Michael also served as chaplain to the Campamento Intermedio, a camp for adolescents, and worked with the youth in the diocese. Michael chaired the Diocese of Panamá Commission on Ministry for seven years, and was a member of the Music and Liturgy Committee. He oversaw the liturgies for Diocesan Convention and the Commission for Theological Education in Latin America and the Caribbean (CETALC). Michael produced a worship booklet that included the Daily Office and the Holy Eucharist (including lections) in Spanish, English, French, and Brazilian Portuguese. He is a member of the IARCA-TEC Covenant Committee (Iglesia Anglicana de la Region de Central America and The Episcopal Church) for the Region of Central America. Michael and Mona returned to the United States in December 2011, and he is now the Priest-in-charge of All Saints' Episcopal Church and Vicar of Misión Cristo Rey in Watsonville, in the Diocese of El Camino Real. For his selfless service and his commitment to proclaim the Gospel across cultural and national boundaries while living with the poor and forgotten of Central America and the United States, the Board of Trustees of Church Divinity School of the Pacific awards the Doctor of Divinity honoris causa, to Michael "Padre Mickey" Dresbach.
I was totally surprised when I received the message that CDSP would be giving me this degree, and I am quite humbled by it. It was great to see everyone last night. Miss Bebé, the World's Most Beautiful Granchile™ was there and, while playing with my hood, announced "I really like your award!" 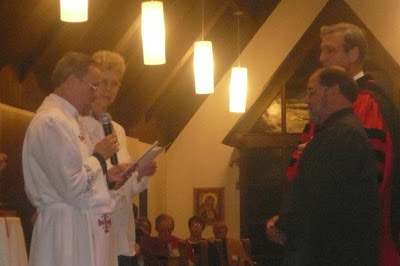 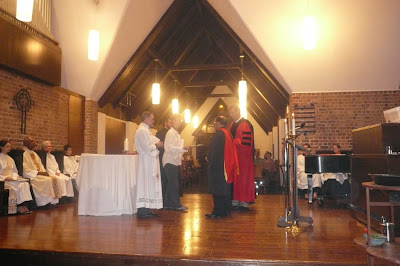 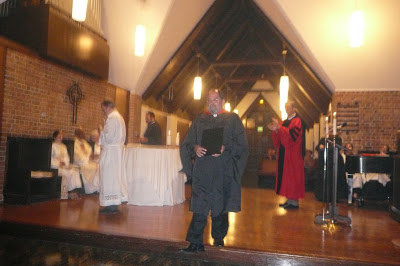 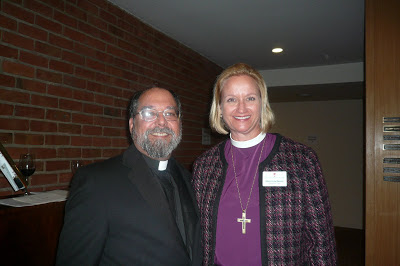 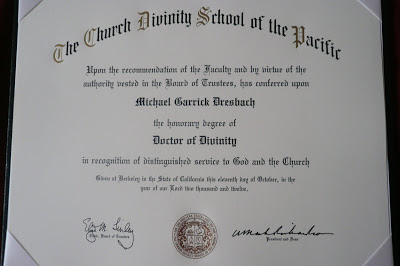 Email ThisBlogThis!Share to TwitterShare to FacebookShare to Pinterest
Posted by Padre Mickey

I love knowing you.

I love you being recognized for the full fledged loving priest that you are and for all that you do to add to the lives of all those around you...you inspire good and share joy lavishly.

So glad to hear this!

Is Bishop Gray-Reeves that tall or, Padre, are you {um} vertically-challenged?

The good Doctor Padre is nicely tall enough, thank you. Some of us don't love talking to a pectoral cross or getting a stiff neck during a conversation. 8-)