People who tell  lies get away with it because those who know better do not challenge them.  We need to call them out wherever possible.

This lie come to us from  Archbishop Timothy Dolan of New York,  an avuncular engaging and highly intelligent man who will soon be elevated to Cardinal.

He is a passionate opponent of rights for gay people.    Speaking about the recent passage of equality in New York, Abp Dolan tells lies:


But "no sooner was the ink dry,"[Dolan] said, than priests throughout the state started coming to him with stories of couples threatening to sue if they didn't agree to rent out their parishes for same-sex weddings.

This is prima facie a lie.  It's not possible.  Why?  Because the NY equality law explicitly states:

Abp Dolan knows perfectly well that he has full freedom to refuse to marry anyone for any reason.  After all, his church considers civil marriages between divorced people to be invalid and refuses to perform them.  Yet you don't seem him advocating to prevent such civil marriages, or claiming that the divorced are suing to get into his churches. 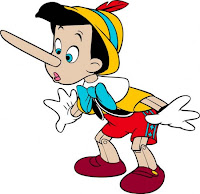 While the US Conference of Catholic Bishops attempts to enforce Roman Catholic dogma on civil law, it's important to pushback against their efforts to claim victimhood.  Religious liberty is not being infringed.  Indeed, it's being protected.  What's being curtailed is his  privilege of claiming that the Roman Catholics speak for all.

They do not.   Many many faithful Christians disagree with Abp Dolan, including a majority of his own laity who support marriage equality!

Archbishop (soon Cardinal) Dolan has used offensive comparisons to describe gay people, and written threatening letters to President Obama demanding that gay people should not have the civil right to marry.  This also crushes the religious freedom of LGBT people who worship in supportive religious denominations that support marriage equality.

Abp Dolan is free to oppose marriage equality.  But if he uses lies and degrading language, we need to keep calling him out on it.  Politely, but firmly.

Update:  he's none too nice to child abuse victims either.  Read the shocked comments to this post on Abp Dolan's blog.
Email ThisBlogThis!Share to TwitterShare to FacebookShare to Pinterest
Posted by IT
Labels: Catholic, marriage equality, religious freedom