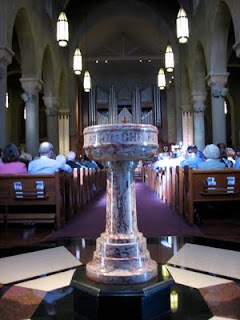 I go to church every Sunday with my wife. Some Sundays we go twice, to Evensong as well. My wife is now a thurifer and an acolyte, so I often am left in the pew doing Episcopal calisthenics while she's up on the chancel doing other things. (As an aside, she is so joyful and happy up there--and in church generally--that the long journey she took to TEC was really worth it. Give yourselves a pat on the back.)

I listen to the familiar rhythm of the liturgy, so similar to the Roman Catholic words with which I grew up. I listen to the full throat of the organ and the voices of the choir weaving the tapestry of classical polyphony. And generally I'm lucky enough to get a really good and thought-provoking sermon, too, as the quality of preaching is quite high. But I don't sing, I don't say anything, and I don't take Communion, because I'm a church-going non-believer.

Yet I'm not alone in being an…. accommodator. Recently, the Templeton Prize was given to astrophysicist Martin Rees, who has been described as a "Churchgoer who doesn't believe in God." He commented in an interview,


What I've said is I'm happy to attend my college chapel and things like that, because I see this as part of my culture, just like many Jews light candles on Friday night even though they don't believe anything, and my culture is the Church of England, as it were.

Similarly, my culture is clearly high church trinitarian sacramental Catholicity of one form or another. Hence the comfortable familiarity of the liturgy makes it a pleasant experience. I would have a much harder time with a more…. er, "contemporary Christian" kind of thing. There would be no cultural connection.

As the philosopher John Gray said in a recent interview,


"I'm not a believer, but I'm friendly to religion, partly because it goes with being human—it's an odd kind of humanism which is hostile to something which is so quintessentially human as religion."

So, I remain a non-believer in the pew. I don't make a point of it, because after all I'm choosing to be there. I'm sure most of the folks in church don't know or notice. Those that do, may think I'm simply "earlier on the journey" than others. (I think some people think I'm Jewish, based on the occasional question. This is a frequent assumption because I'm dark and strong-featured.)

Instead, I tend to think that I've gone much further. I've gone past being religious, through my religion-bashing phase and to some extent am post-religious. Now I can find the common ground with my socially progressive instincts and faith groups who articulate it on the ground.

Besides the music is great.

LOL-- passive aggressive -- I do that myself and I´m a believer!

IT, what a wonderful articulation of your place amongst us as a non-believer. I cherish your presence. Did I ever tell you that you're my favorite atheist?

My local university church recently did a survey and found a not insignificant number of attenders were atheists. What I haven't pinned down from them is how many were in the choir (which definitely has at least two Jews and one atheist).

JMO, but I think you, IT, are neither "earlier on the journey", nor further along.

We're all on our own individual journeys (and yet, via our corporal presence in the Church, we travel individually, Together! Paradox).

Do all the individual journeys reach the same destination? Some say Yes, some say No.

I think, rather like Sinai, the top of the mountain is veiled from sight. Even as we may---for shorter or longer periods---view each other on our journeys, we get the faintest vision of the top (FROM our individual POV). Just enough to keep going...but NOT enough to say (God forbid!) if someone's "on the wrong path."

JCF I wasn't speaking ilinearly about anyone else's journey but my own -- and the comment that I've heard IRL, "you're just much earlier on the journey". Which I admit I find rather annoying.

"On the wrong path", "early in on in the journey"? No wonder you get mad at Christians, how dare they!

There is a wrong path, but it's to do with how we live, not with what we believe.

And as many Christians are on that wrong path as non-Christians. Christians should know it: by their fruit shall you tell them, not by their smugness, by their superiority about their faith, by their unwillingness to look outside their own lives.
Time more Christians got that!