Over at OCICBW, MadPriest argues that TEC, by choosing Gene Robinson as a Bishop, had a disproportionate impact on the movement of LGBT equality. He writes,

I truly believe that if the Episcopal Church had not ordained Gene Robinson as bishop of New Hampshire, if there had been no fight with those within TEC who opposed the ordination and if TEC had not been marginalised within the Anglican Communion by Rowan Williams, then the recent outrage in the US in response to the teenage, gay suicides would not have happened. There would also be far fewer gay people among Obama's nominated officers and no states voting to allow same sex marriages or any of the other advancements in justice for gay people that have happened over the last few years.

….The fact that The Episcopal Church is a church has been a Godsend. The media would never have been so attracted by any other type of organisation standing up for gay rights for the same reason they don't write about a manager of a drinks vending machine company having an affair with his secretary but will splash a priest's infidelity all over the front page.

I agree with MadPriest. I can tell you why I started exploring the Episcopal blogosphere seriously, and TEC as a home for BP: Gene Robinson. Yes, I was interested in LGBT rights and religion's effect on them, but the statement made by Gene Robinson's election was profound.

Elsewhere, I have written: 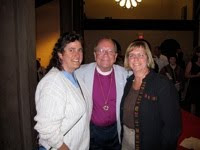 I have long felt, as I'm sure have many of you, that the log jam broke with the election of Bishop Gene Robinson in 2003. Not just breaking a logjam of exclusion of GLBT people from all levels of the Episcopal Church, but also a reaffirmation, and a challenge against the shrill voices of the right wing who claimed to define the concept of "Christian" . I think Bishop Gene helped voices of inclusive faith coalesce and reclaim "Christianity" from a narrow political movement. And I think history will see his election, and the coalitions it created, as a hugely important moment in GLBT equality in this country, well beyond one denomination.

TEC still bears an influence out of proportion to its size. MP is right. It mattered to all of us immensely.

Pic: IT and BP meet Bishop Robinson.
Email ThisBlogThis!Share to TwitterShare to FacebookShare to Pinterest
Posted by IT
Labels: Gene Robinson

What a wonderful picture--how healthy/normal and happy everyone looks--quite a nice holiday present to see IT and BP with VGR--Thanks, it´s always nice to have a visual image to reflect on (at least for me).

Can people please stop saying +Gene was "appointed"? He was elected by New Hampshire and approved by the bishops and standing committees. Other than that, I agree with MP.

Yes it was an important piece of the work of the Holy Spirit.

(but the picture is to small for my poor eyes...)

The election of +Gene Robinson certainly affected my relationship with the Episcopal Church, formerly it was arm's length (and probably on my way out), now it's much closer and a lot stronger.

I agree. His election was a major event. I also agree with Madpriest. Gay kids have been killing themselves for decades, but only lately have we begun to notice. +Gene may have something to do with changing that formerly routine type of event into a shocking scandal (which it always was, even back in the days when such deaths were hushed up or described as "accidents").

IT et al,
Take a look at Real Anglicans for what I think are some unitended consequences. I would be very much interested in your opinions.