Of mosques and history: fear and loathing in America

The US is not at her best right now. In the ascendant is an old fashioned nativist party, not unlike the aptly named “Know-nothings” of a previous age . We’re seeing this play out in the conflict over Islam in this country, from sea to sea. In New York City, in Murfreesboro Tennessee, and in Temecula California, local groups are protesting the presence of mosques (or in the case of NYC, an Islamic prayer center—not a mosque). The press colludes in this, allowing the nativists to set off “The Muslims” from “Americans”. A whopping 70 % concurs (poll) and the President is taking heat for defending the Constitution Amazingly, some attempt to justify this blatant prejudice by claiming that Islam is not a “real” religion, that somehow our Constitutional freedom of religion does not include Muslims.

There’s an America where it doesn’t matter what language you speak, what god you worship, or how deep your New World roots run. An America where allegiance to the Constitution trumps ethnic differences, language barriers and religious divides. An America where the newest arrival to our shores is no less American than the ever-so-great granddaughter of the Pilgrims.

But there’s another America as well, one that understands itself as a distinctive culture, rather than just a set of political propositions. This America speaks English, not Spanish or Chinese or Arabic. It looks back to a particular religious heritage: Protestantism originally, and then a Judeo-Christian consensus that accommodated Jews and Catholics as well. It draws its social norms from the mores of the Anglo-Saxon diaspora — and it expects new arrivals to assimilate themselves to these norms, and quickly.

This seems perceptive, but then Douthat puts himself firmly in the 2nd group.

For Muslim Americans to integrate fully into our national life, …. they’ll need leaders whose antennas are sensitive enough to recognize that the quest for inter-religious dialogue is ill served by throwing up a high-profile mosque two blocks from the site of a mass murder committed in the name of Islam.

They’ll need leaders, in other words, who understand that while the ideals of the first America protect the e pluribus, it’s the demands the second America makes of new arrivals that help create the unum.

Our friend Counterlight has some more comments specific to the NY conflict.

The America of a “distinctive culture” that Douthat celebrates is the same America that was violently opposed to Catholicism in an earlier time. Indeed, in the 1700s, Catholic priests were forbidden entry into New York. Ironically, in Murfreesboro in the 1920s, there was opposition to construction of a Catholic church not unlike the protests today against the mosque.

[O]hers were not pleased by the anticipated construction of a Catholic church. The local and vocal chapter of the Ku Klux Klan (KKK) took exception….. One of the organizational catalysts [of the Klan] was the massive immigration of that period from the largely Catholic countries of eastern and southern Europe. This new Klan preached racism, anti-Catholicism, nativism (favoring of native inhabitants over immigrants) and anti-Semitism. It was organized at a national level and flourished particularly in the Midwest where it took control of several state governments.

Hmmmmm….. sound familiar? Despite Klan protests and a march that included many prominent citizens, the new Catholic church was dedicated in Murfreesboro in 1929. Apparently memories there are not long enough.

But it doesn’t stop with protests against religious buildings. In Pennsylvania, an archeological dig has uncovered the bones of Irish laborers in a mass grave from the 1830s, and with them, signs of violence that killed them. The Irish immigrants were loathed and feared at that time. Nearly 200 years later, there is a spate of violence against Mexicans in New York. . We have changed our definition of The Other, but we are still attacking him with violence. 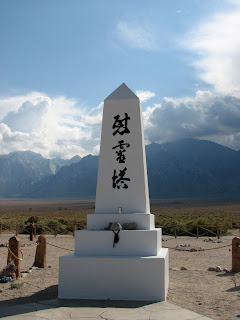 In 1942, Japanese Americans, including legal citizens of this country, were imprisoned in remote prison camps throughout the west: no due process, because there was no crime. In 1988, the nation finally apologized to the few survivors. I took these photos in Manzanar, where the remains of one of the camps sits on the bleak plains below the Eastern peaks of the high Sierra. This was a brutal, bitter, horrible place where we as a people inflicted cruelty on our fellow citizens simply for being a recognizable minority.

We seem destined to re-live the hysteria of the past, over new groups, the gays, the Muslims, anyone who the mob can be inflamed to fear and loathe. I'm surprised that Lady Liberty in New York Harbor doesn't pick up her skirts and walk back to France. There's little here to admire anymore. I am wondering how many times you lot will have to relive this lesson?

nativism (favoring of native inhabitants over immigrants)
Since it seems no one was here when our ancestors immigrated to the Americas, we are the original inhabitants and all of the rest of you are immigrants from more recent migrations. Wet backs, every blessed one of you. Too bad we could not drive you out before there were so many of you. Now you think that you own the whole damn place!

It's just too bad the native Indian population didn't practice nativism sooner (as in about 1500). We wouldn't be having this mess, now. :)

Yeesh....is this is the "hate America" crowd that I thought Glenn Beck and Rush Limbaugh made up out of whole cloth?

Maybe Anon. should read this correspondence between an East Coast elitist and another group of religious undesirables, and then get back to me on who really hates America:


Thanks for the links, IT.