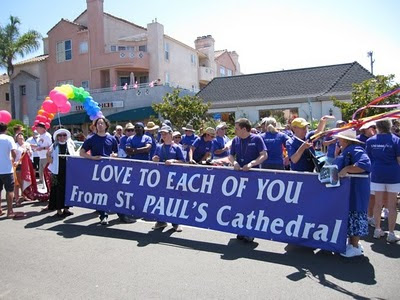 This past weekend was San Diego's Gay Pride parade. The Episcopal Cathedral of St Paul's won this year's Stonewall Service Award for its long support of equality. As usual, the Cathedral also fielded the largest contingent of marchers in the parade, with around 130 purple-clad parishioners, friends, family, kids and clergy walking with rainbow streamers, flags, and the big purple banners that say "Love to each of you". Lots of cheers from the crowd of 100,000 onlookers, some of whom ran out to hug the marchers.

But the pinnacle of the weekend was an announcement during the Rev. Canon Allisyn Thomas's sermon on Sunday. She informed us that Bishop James Mathes has given St Paul's permission to offer same sex blessings. There were many tears of joy in the congregation, as long-time couples realized that they, at last, can fully belong. (BP was singing in the summer choir, so I had to wait for the Peace to be able to sneak into the choir to hug her tight!) The details of the process are to be worked out, but the expectation is that gay and lesbian couples will be required to adhere to the same rules, policies and procedures as straight couples as far as possible. Which is as it should be.

San Diego is a large, very diverse diocese, encompassing a fairly conservative part of the state. Needless to say, it is not of one mind. The Bishop requires any parishes considering blessings to embark on a self study patterned on the Diocese-wide document on Holiness in Relationships, and then the clergy must ask his permission. I am absolutely certain that there will be parishes whose priests do not choose to participate, and for whom this decision will be met with some dismay.

On the other hand, I know several straight couples with new babies who joined St Paul's specifically because of its inclusiveness. And as I waited in the queue after Mass so I could hug Allisyn, an older gentleman in front of me turned around and said, "That was a heck of a sermon. And I'm right of center. But at the end of the day, we don't have to agree on everything as long as we can come together here as family." 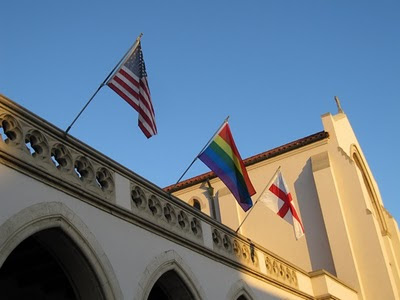 On the other hand, I know several straight couples with new babies who joined St Paul's specifically because of its inclusiveness.

Same reason (well, one of them ;) that I lobbied my family to begin attending our current parish. Amongst other things, I want my church to set a good example for my children. And ours does!