Our friend Lisa over at My Manner of Life ruminates about Abp Rowan Williams' recent "mumblemumble" as she puts it.

Lisa comments on the willful hypocrisy of the ABC in blaming the Episcopal Church for all the current problems, as though only TEC is liberal on the issue of GLBT inclusion. That is, we know, a flat out lie, and in fact other Anglican churches (such as sensible Canada) have been even further in front. Of course, as Prior Aelred has told us, the problem is not that TEC ordains gay Bishops, it's that TEC does it HONESTLY. (Yes, CofE, we are looking at you and your closeted gay bishops and secret gay eucharists!)

I am coming to believe that Archbishop Williams has a particular animus against the U.S., which he extends to The Episcopal Church. Given that so many national churches in the Anglican Communion are moving toward ordination of gay/lesbian people … and accepting gay/lesbian unions …. why does he reserve such particular hatred for those of us in the U.S.? I do not understand.

I remember around the time of the Gulf War overhearing a rather pompous person sitting at the same refectory table who was absolutely excoriating the US actions. I became annoyed at this because he was deliberately ignoring the fact that the British were willing and active supporters of the US policy, and I dared challenge him on this: Perhaps he should look to his own country's involvement, which he had the potential, as a citizen, to change! He just about blew up, denied that the British carried any independent responsibility for their own actions, and went back to completely bashing everything American.

Of course, he wanted everything that American initiative and ingenuity created--he just didn't want to credit the Yanks for it. I am convinced that if the US, metaphorically speaking, tried to save a starving animal, this type would kick it to the ground simply to oppose what the Americans were doing. Because in their minds, Americans never do anything good.

Now, let me stress that this is a specific type of person, certainly not characteristic of the majority of Brits (who are fine and stalwart friends), but characteristic of a rarified atmosphere found notably in ivory tower academics, where the lack of oxygen can lead to odd behavior. Not all academics, mind you, but a certain slice of them. So I want you to consider from whence comes the ABC. 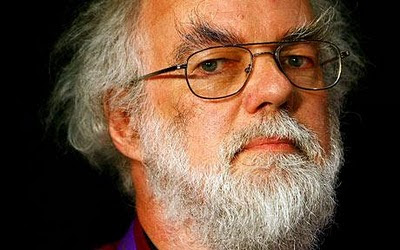 I suggest that Rowan Williams is acculturated to loathe Americans. He buys into the stereotype that we are rich bullies: crass, stupid, and unsophisticated, with an Oxbridge snobbery about it. That is why, as Lisa notes, he is empowering the hate-propagating schismatics, and ignoring what he knows is right: because if the Americans are doing it, it must be wrong. He ignores the equal role of other groups let alone his own church. He ignores his own complicity. He cannot see the log in his own eye, while he gouges at the speck he perceives in TEC.
Email ThisBlogThis!Share to TwitterShare to FacebookShare to Pinterest
Posted by IT
Labels: ABC, CoE, Episcopal Church, Rowan Williams, Split in TEC

I don't know what experience Lisa made in the UK, but her perception is only half right.
Yes, on the whole Brits (and all Europeans) stereoptype Americans the way she describes.

But this also means that we absolute love and adore those we perceive to be more like us, i.e. the liberal ones, the Democrats, the Episcopalians. They're the ones who help us to feel that America is still our best ally, they're who make those Britons who hated Margaret Thatcher and Ronald Reagan believe in that special relationship, and Obama has a huge approval rating and fan base in Europe. Liberal newspapers who report on church matters celebrate Gene Robinson.

I don't understand Rowan at all, but I am 100% confident that there is no liberal European prejudice against liberal Americans.

I come here for the first time in ages & find myself quoted -- on my birthday, no less.

And, yes, I certainly did say that.

Hmmm -- I suspect that the resentment many Brits feel towards the USA ("The Yank are overpaid, oversexed and over here.") is actually hinted at in the conclusion of "1066 and All That" -- after the First World War, America became top nation and history ceased.

Erika, to be clear, I was speaking of MY experience, not Lisa's.

And while I know that most liberals in the UK are not described by this, I can assure you that there were some of my oxford colleagues who never could and never will get past my accent no matter what my politics.

Which is why i tried to make it very clear that this is a small subset of academics to whom I refer, and NOT the populace at large, who as you note are far more sensible.

There is sometimes a lack of oxygen in the ivory tower that explains quite a lot.

Happy Birthday, Prior Aelred! We have missed you!

Thanks for this perspective, I.T. I'll be linking it.

IT
If you're right it would be truly shocking - that an intelligent and genuine Christian academic could be so blinkered and prejudiced that he cannot see the good in one group of people nor the bad in the other.
I struggle with the enormity of that conclusion.... and I hope you're wrong.

I sometimes think that America is like what Voltaire said about God, if it didn't exist, the rest of the world would have to make it up.

The USA is very large and very powerful, and still dominates the world economy. But as Americans are learning right now, our power ain't what it used to be. It has its limits. There's very little we can accomplish anymore through imperial fiat. We must have international cooperation just to pay for things these days.

I suspect that we will continue to play our role as an object of resentment even after the Chinese supplant us as the world's dominant economy.
I think our role as an object of colonial resentment is very convenient for some global south bishops who want to distract their flocks from their own lack of responsibility. I don't understand ++Canterbury's anti-Americanism, his refusal to understand or appreciate our polity, even after enjoying our hospitality.
I also think that European anti-Americanism gets overplayed in the American press.

Erika, so you love those who are just like you?
How is this "progressive"? How does this "celebrate diversity"?
If I say to someone, "I like you if, when and to the extent that we agree and are similar. Should we differ, you will be denounced as inferior and expected to conform." You repeat/echo the arguments of the fundiegelicals who run idiocies like "ex-gay" programs and "Jesus camps"; unbelievers/the 'disordered' have to change ("be born again")and THEN they will be acceptable.

In preparing Troll Soup, remember: you have to soak their heads a long time, to get the bitterness (and Crazy!) out.

Oh crap, our resident troll is back, Hater Brad.
He makes me think of Jon Stewart's definition of an atheist: someone who worships their own smug sense of superiority.

Well, Brad's comment this time is provocative, but not unreasonable. (Even a stopped clock is right twice a day).

It's painful but how DO you manage to "live with" people diametrically opposed?

I live fine with them as long as they don't want me to follow their ways - which the usually do. They are welcome to their ideas but those stop where I begin and live

Just let Brad stick around for a little while and you'll see why I moderate his comments.
He ain't The National Review or the editorial page of the Wall Street Journal. He ain't even Fox News.

Glad you caught him. "Brad, thy name is Troll."

You're right; atheists/agnostics aren't on Faux news, except as guests. I've never read "National Review" but "WSJ" is useful. Do you think I should read something that you read? What are your suggestions?
Self-segregation is something that "progressives" have been deploring since the battles over school desegregation but Sunday mornings remain the most segregated time in American life. You belong to a church overwhelmingly white, middle/upper middle class. Do you see any class basis to your disagreements with the fundiegelicals? If so, what? How do you deal with them?
How is any of this 'hate'?
How is hate impossible to deal with? Who gets to determine what it is?

Do you see any class basis to your disagreements with the fundiegelicals? If so, what? How do you deal with them?

OK, I'll bite (though this will be off-topic):

There is some class basis involved, but that's heavily related to a regional basis (or bias!).

What I'm getting at, is the *desperate* need for the US to have (like other developed countries) national educational standards. No more of this Fundagelicals capture the school board, and then impose their anti-science, anti-critical-thinking, pro-Fundagelical in(s)anity! [And no more letting home-schoolers get away w/ their Christianist cr*p curriculums, either!]

I didn't grow up wealthy . . . but I DID grow up in a suburb of Sacramento CA, that was blessed to have public school boards that actually favored . . . education (Shocking, I know! ;-/)

The same mindset that learns that God created the Earth in six 24-hour days, 6000 years ago (dinosaurs and humans together }-X) are also taught that human beings "choose" their sexual orientation (or rather "God made us ALL in an Adam&Eve kinda way", and it's SINNERS who choose to go the Adam&Steve way-to-perdition").

I seriously hope that Obama (2nd term, if at all) calls for/passes National Education Standards legislation. It's the only way that we can hope, SOME DAY, to bring this badly divided country back (closer!) together again.

Oh, I know Brad, and I willmoderate him when he goes wacko. But his original point is a good one, even though HE made it. We all prefer people who agree with us. The challenge is making room for those who don't.

And who will set the standards?
Are you sure this isn't another example of "We know better than you/Take up the (Upper Class/Volvo-vote) White Man's Burden/Paternalism-but it's OK, we're doing it, just like busing was, or the end of the military draft?
Too many "progressives" talk about democracy and practice paternalism.
Most Mainline Protestants haven't truly gotten used to the fact that the Rest of the Country isn't like them anymore.

Brad, we know what you're against (damn near everything). What are you FOR?

I'm a big fan of separation of church and state.
I don't think clergy/religions should get tax breaks.
I think "hate crimes" are either meaningless or already covered in laws already on the books.
I like saving money, time and trouble whenever possible.
I think 'creationism' is another pseudo-science, like astrology, phrenology and dialectical materialism.

Brad - you and I agree on all but the "hate crimes" so almost everything you list.