Demographics: who are these Episcopalians?

A while back a question came up asking how religious denomination correlates with education. The data exist, thanks to the Pew Forum on Religion and Public LIfe. I downloaded the data and processed it for you.

Due to how the data are collected, the Episcopalians are generally lumped with "Mainline Protestant" on the big comparisons and broken out separately only on sub documents that focus on Protestants. But I pulled the Episcopal data and added them to the Big Table for your interest. I named these a little differently from the Pew data: "Unaffiliated" means people of faith without traditional affiliation; "None" means no religion/atheist/agnostic, etc.

The first graph looks at levels of education, from no school, to high school, some college, college degree, or post-graduate work. The chart is sorted in descending order from those with most education (College + postgrad combined) to those with least. As you can see, the highest levels of education are non-Christian faiths (Hindu and Jewish), but the 'piskies are pretty high. More conservative Christian denominations such as the Roman Catholics or Evangelicals are much further down the chart, indicating that a larger fraction of those belonging to this group have lower levels of education. 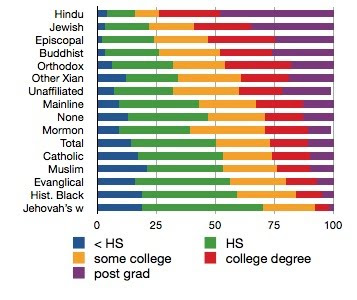 The second chart takes the same groups and asks whether they have a positive or negative view of gay people. Although there is some expected agreement, this chart does not completely correlate with the education chart; for example, Hindus are much less favorable to gay people, although very highly educated. The unaffiliated group is most gay-positive, and the Roman Catholics are right up there with the Episcopalians. Perhaps someone should tell the RC Bishops, who are busy attacking gay marriage around the country, that they've lost the people 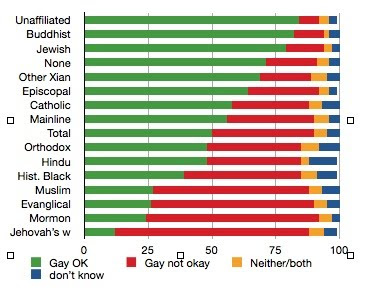 The study found education was about five times as important as race in determining whether a county's residents favored the ban. .....
"There's a lot of evidence showing increased education leads to greater tolerance," Smith said.

I don't think any of us are surprised with that. But it is interesting how different the denominations are, don't you think?
Email ThisBlogThis!Share to TwitterShare to FacebookShare to Pinterest
Posted by IT
Labels: Catholic, Episcopal Church, gay rights, Mormons

Episcopal is not mainline in either graph. I guess we're in the second line.

In the second graph, the majority of Catholics are not as Catholic as the pope.

It must be tough to be JW; always at the bottom of the graph. I wonder where GAFCON falls.

Things that struck me: how different is the rate of higher education for Hindus HERE (in the US), compared to India!

The rate of higher ed for Muslims is very likely influenced by the number of "Black Muslims" (that is, all African-American converts to Islam). Without them, the percentage w/ higher ed would likely be greater.

Of course, Hindus and Buddhists receive converts, also---but, anecdotally, a high percentage of them are Jewish! ;-)

Everything else is basically what I would expect...

IT,
Great job but hwne do you do your regular job?

Mimi, Episcopal IS Mainline. I had to break it out of Mainline for you, as I explained in the post.

Fred, this kind of thing is easy-peasy--and I am geeky enough to love making charts and graphs.

Sorry, IT. That's what I get for skimming. That's why students make bad grades on tests.

Encouraging the sin of Pride is a questionable activity, is it not?

Guess your governor should have stayed a Hindu, Mimi.

I still can't get over the fact that he was chosen to be a Rhodes scholar. He's said and done some really dumb things.

Mimi,
There is a strong political component to Rhodes scholars. The application process includes tea with the British Consul.

IT, I know, but I thought that they had to be smart and have a smattering of knowledge and be able to think. In Louisiana, we have both Jindal and David Vitter out of the Rhodes Scholarship program, and both are busts as leaders.

Jindal was a politician, as was Vitter. To an academic, the question is whether any one ever cited their work.

IT, Jindal's article on how he exorcised a demon is much cited, but not by academics. And then you can't read the entire piece unless you pay.

Mimi,
I think any academic would agree they long since sold out -- i mean, it's a party that REVELS in ignorance.