Pride: "Our love to each of you" 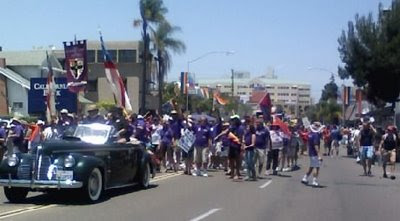 Today was the Pride parade in San Diego, and our new friends at the Cathedral persuaded us to march with them. San Diego's Pride parade runs the gamut from bois in speedos and boas, to church and family groups, to labor unions and other liberal causes. Like most pride parades these days, the ratio of mainstream folks to more outrageous types has increased enormously, and there are lots of kids and families. The Cathedral is traditionally one of the biggest groups marching, in their purple t-shirts.

BP and I walked out to the assembly point with the Dean and had a pleasant talk with him. It was a hot day, but he and all the clergy participating wore their black shirts and collars so they were unmissable. As we walked with the Dean, well before the parade itself started, folks assembling along the route waved at him, and shouted "Yay, St Paul's!" or "Thank you Reverend!" They were just joyful that a minister was there.

At one point, we passed a side street that was blocked off. A row of San Diego mounted police sat on their horses, side by side facing the parade route. Behind them were the haters. You know the type we mean, with loudspeakers, and signs all about evil and "homosex" and the Bible. As we passed them, we heard them say something remarkable over their loudspeaker:

"If you think God doesn't hate, then you don't know God!"

Really. That was their message. The Dean and BP had a conversation about the haters' idea of a God that hates, actually hates, people. The Dean and BP were deeply puzzled. "God is about love," they agreed. "How do they get hate out of that message? What are they reading?" and the Dean told us that around Prop-H8 time, a group similar to that had invaded the Cathedral and interrupted the Eucharist in protest of inclusion.

Of course, as BP and I noted, this message of hate was being directed at the rear ends of about 8 unflappable police horses.

As we organized at the assembly point, the group (close to 100 people, straight, gay, white, of color, old, young...) picked up a number of banners. The biggest were two identical ones held on either side by 3 or 4 people:

"Love to Each of You, from St Paul's Cathedral." 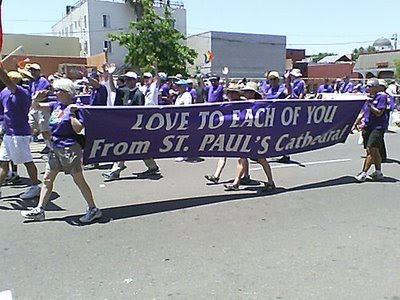 As we got underway (we were group number 85 of about 150 participants) first came a couple of guys with big poles and colorful streamers, then a St Paul's banner, then two convertibles each with a couple of clergy sitting on the back waving, then folks carrying TEC flags and a Cathedral sign, then a huge crowd of walkers including the Dean and the rest of us in purple -tshirts, flanked by the 2 big "love to you" banners, and carrying rainbow flags and streamers, and signs for marriage equality, and finally one canon in clericals and big straw hat, who rode a recumbant bicycle and circled back and forth, with bright rainbow streamers flowing behind him. 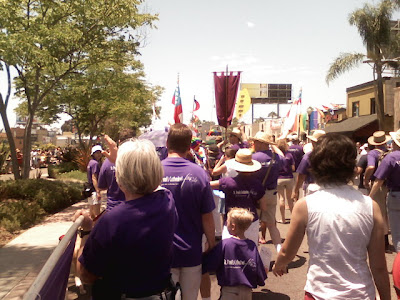 At various points along the route, announcers introduced the participants, and commented how the huge St Paul's group went on and on. A lot of the observers cheered and clapped. Many were older folks. And many, many of them took pictures of those big purple "Love" banners, and some of them wept, and waved, and thanked the marchers. And we cheered as we passed the sad group of haters, still held to the rear of the stallwart police horses, and we held the banners up for them to see.

Photos from IT, except for the banner, which comes from here

I have commanded you to love everyone.....

Jesus got it right!

The image of you and BP marching with the Episco's makes me smile, IT.

A wonderful image of reality!

Check out the great post about the San Diego Pride Parade at Pam's Blend from Autumn Sandeen... she took a lot of pictures, and the sequence with the St Paul's folks starts here.

Thanks, Ginny! I'm swiping the one with the banner....

What a wonderful celebration! Thanks IT for bringing it to us in the hinterlands. As for the "haters". My first reaction was that we don't worship the same God. They sure haven't read the Gospels. Then I just started feeling sad. Look what they are missing.

I was just going to post that I agree w/ them: "If you think God doesn't hate, then you don't know God!"

No, I don't know their hate-full little "god". Oh, I think I've been tempted by him, the Father-of-Lies, a time or three. May have even given in to him.

Then, praise Christ, I "came to myself" (as did The Prodigal), and repented.

Wow! The parade sounds lovely, IT. I'm so pleased that your group from St. Paul's gave such a great witness.

Again, I must say how much I enjoyed my visit with you and BP. I can picture you two in your purple shirts (just like bishops!) marching in the parade.

Oh, ours is a MUCH better shade of purple, don't you think, Mimi? And if you look carefully at that picture, being as you know us, you might just spot us.... ;-)
Hugs back to you, wish we could settle in for another nice visit soon.

Compare and contrast: a photographer took pictures of two sets of signs. One was from a welcoming church (not alas St Paul's but one with a great sign) and one was of the haters.